Code.7370, a program developed in part by Hack Reactor to train motivated prisoners in San Quentin State Prison to code, held its first graduation earlier this week. Hack Reactor developed the curriculum for Code.7370, which seeks to reduce recidivism by providing inmates with marketable coding skills. Sixteen students completed the program, which focused on HTML, CSS and JavaScript. The initiative was created by Chris Redlitz and Beverly Parenti, founders of The Last Mile, a program to set prisoners up for success when their sentences end.

“There was a tremendous turnout to support and congratulate the students,” notes Hack Reactor Cofounder Shawn Drost, “but for me, it was also an opportunity to celebrate the success of our inaugural class along with the staff and volunteers that made it possible.” Drost helped coordinate the course and served as a lead instructor. 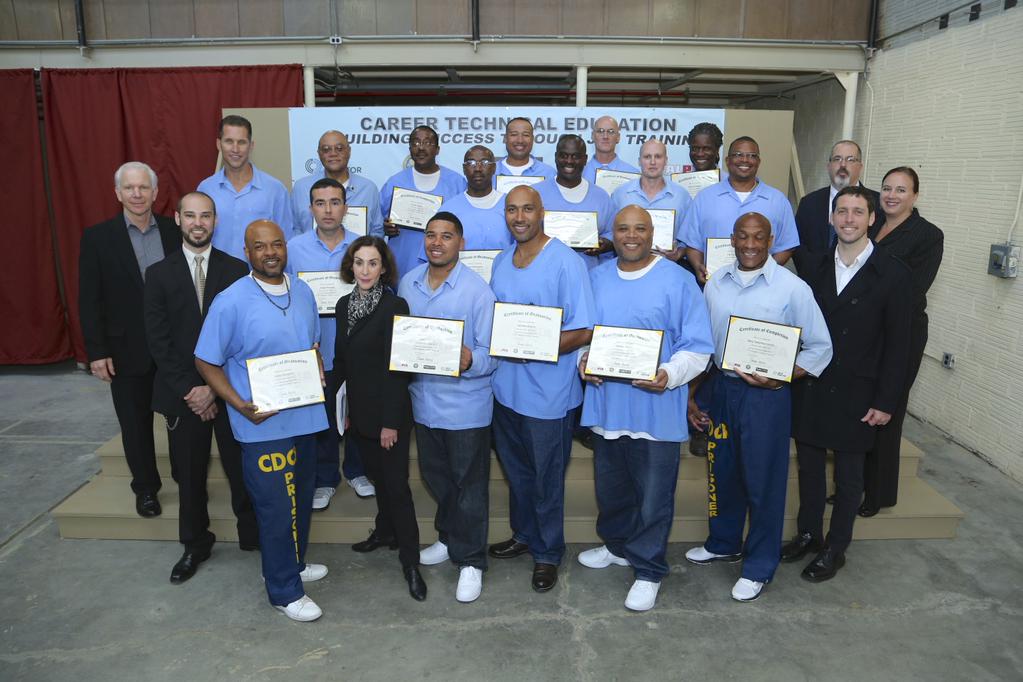 The first class of Code.7370 celebrated their graduation with Hack Reactor cofounder Shawn Drost (front row, far right) and others who made this program a success.

The graduation marked the successful completion of a course that had unique challenges. Prisoners were not allowed to have access to the internet, and so the program used a proprietary program architecture to simulate a coding environment. Some of the inmates have been incarcerated for long enough to not have had any exposure to the internet, let alone programming, prior to the course.

“The students were incredibly inspiring,” said Hack Reactor alumnus Keenan Lidral-Porter, who served as a technical mentor for part of the program. “Someone built an angular app that used regular expressions to validate all their forms. I still ask google whenever I have to use a regex, and these guys are learning it all through books and restricted computer access. They reminded me that you can do anything with enough motivation and discipline. They’re rockstars.”

The inmates are at varying points in their sentences. Some look forward to using their new skills to get a job in the tech sector, while others will mentor the next class of students at Code.7370. With the first class completed, the next challenge for Code.7370 is to turn this success into a virtuous cycle in which graduates assist the next class.

Graduate Chris Schuhmacher, an inmate at San Quentin State Prison for the past 15 years, delivered an inspiring speech during the graduation ceremony. He tracked all the hours he had spent coding during the program and had logged a total of 679 hours. These hours changed the trajectory of his life, and as a gesture of appreciation, he plans to pay it forward by volunteering 679 hours back to Hack Reactor once he is released from San Quentin.

“I feel like technology has been passing me by. Now I get to learn some skills,” Schuhmaker said.

In addition to Hack Reactor and the Last Mile, Code.7370 received support from the California Prison Industry Authority (CALPIA).

Want to join our network of developers doing inspiring things? Apply to our program, online or in four major cities, today.

From Homeless to Hack Reactor to LinkedIn. Student’s Inspiring Journey Shows that ‘Impossible’ is Just a Word