Code.7370, an inspiring project to teach inmates in San Quentin State Prison to program, launched in October with the help of Hack Reactor and the California Prison Industry Authority. Code.7370 is part of The Last Mile, which teaches career skills to prisoners, including entrepreneurial abilities and programs to facilitate reentry. Now, 18 motivated prisoners are learning marketable programming abilities.

“With Code.7370, we work towards a rehabilitative and forward-thinking correctional system,” said Shawn Drost, Hack Reactor Co-founder. “Our staff and alumni are proud to help contribute to the facilitation of the program. It is a joy to work with our motivated and gifted students, and we are already witnessing them excel at computer programming, create valuable skills, and change their lives.”

The program meets 4 days a week, 8 hours a day. The curriculum focuses on front-end technologies, and teaches JavaScript, HTML and CSS.

“Frontend development is typically less code heavy,” said Wes Bailey, a Hack Reactor staff member who helped get Code.7370 off the ground. “The code is going to be less involved. There is still a lot of JavaScript, but, historically, it has more to do with the visual, the layout and typography.”

Code.7370, which is unique among prison education programs, has already attracted a ton of media attention, with the Huffington Post, NBC, USA Today, the Wall Street Journal, San Francisco Chronicle, Fast Company, Ars Technica and over ten other media outlets covering the story. The Last Mile was founded by married couple Chris Redlitz and Beverly Parenti to reduce recidivism in California (which has one of the worst recidivism rates in the country) through teaching business and tech skills. 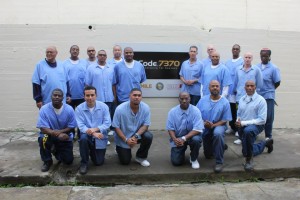 <font-size=”2″ data-preserve-html-node=”true”>The participants of Code.7370, a collaboration of The Last Mile, Hack Reactor and the California Prison Industry Authority, to teach prisoners at San Quentin to code.</font-size=”2″>

“I want to give people, especially driven people, more opportunities to make decisions that make their lives better,” said Jesse LaRue, a Hack Reactor grad who worked to set up Code.7370.

The program “will go a long way to ultimately reduce recidivism, save our state a ton of money and make our communities safer,” says Alex Jacobs, a Hack Reactor graduate who has been integral to the establishment of the program.

In building the curriculum and setting up the logistics of the program, Hack Reactor staff had some challenges specific to the prison setting. Prisoners are not allowed access to the internet, eliminating a key source of problem-solving tools for developers, so Hack Reactor staff have worked for months to set up a database of coding knowledge that the prisoners can reference.

“Many of the participants have been incarcerated since before the internet,” said Jacobs. “There are some pretty big hurdles and a steep learning curve for everyone involved.” He went on to note that the prisoners are undeterred: “The intensity of the motivation and the willingness of the people involved made me optimistic for a great deal of success.”

Code.7370 is already providing hope for people who have been removed from society for over a decade. Equipped with in-demand skills, they are ready to begin a productive life on their eventual release.